Poet, Composer and Musician. Toured with Dead Can Dance in the 1990s, plays Bodhrán. Sings and records with the band Kíla. Ronan teaches rhythm therapy to children and adults. He also composes music for Nature Documentaries.

Rónán Ó Snodaigh (born 1 January 1970 in Ireland) is a musician, poet and vocalist. He is the lead vocalist in the musical group Kíla. He has released four albums to date. Playdays, Tonnta Ró, Tip Toe and The Last Mile Home. He also worked with Mic Christopher on his album Skylarking. and with Breton-based singer songwriter Dom Duff on the album Straed an Amann (Butter’ Street).
Rónán has composed music for nature documentaries Wild Journeys and The Eagles Return.

Ó Snodaigh plays the bodhrán, the djembe, the conga, the bongos and the guitar along with many other instruments.
He is the son of publisher Pádraig Ó Snodaigh. His brother is politician Aengus Ó Snodaigh.

Rónán was born on the first of January 1970 and grew up in an Irish speaking family in Dublin. He began playing the Bodhrán at the age of twelve. From this, he has developed a variety of musical expression. He was an integral part of the “street music scene” that erupted in Dublin in the late 80’s. He’s been a central member of the band “Kila” since they formed in 1985. He was in the Dead Can Dance line up for the “Toward the Within” Tour. He occasionally organises musicians to perform. Ronan records his own songs under the name of “Tonnta Ro”. He has been involved in a wide variety of rhythm pageant, processions and dance shows.

Michael modelled Rónán in clay on a traditional wooden armature. After which he had a mould made of silicone with a fibreglass case. From there he took a plaster cast with a steel threaded bar in the centre for mounting. Michael continued to refine his modelling on the cast. The finish on the plaster is a sort of white wash giving it a marble look and texture. Michael then mounted the plaster bust on to a nice block of wood finished with a clear varnish. 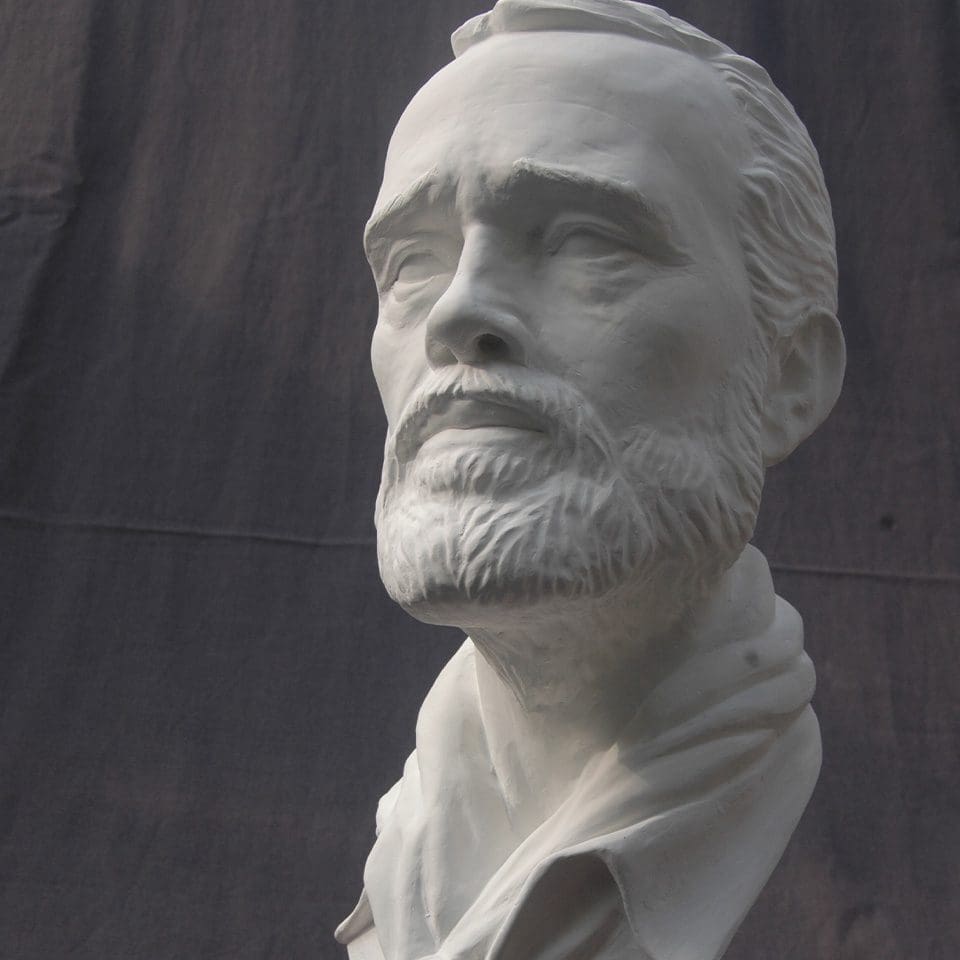